Node.js is a server-side platform built on Google Chrome's JavaScript Engine (V8 Engine). Node.js was developed by Ryan Dahl in 2009 and its latest version is v0.10.36. The definition of Node.js as supplied by its official documentation is as follows −

Node.js is a platform built on Chrome's JavaScript runtime for easily building fast and scalable network applications. Node.js uses an event-driven, non-blocking I/O model that makes it lightweight and efficient, perfect for data-intensive real-time applications that run across distributed devices.

Node.js is an open source, cross-platform runtime environment for developing server-side and networking applications. Node.js applications are written in JavaScript, and can be run within the Node.js runtime on OS X, Microsoft Windows, and Linux.

Node.js also provides a rich library of various JavaScript modules which simplifies the development of web applications using Node.js to a great extent.

Following are some of the important features that make Node.js the first choice of software architects.

Following is the link on github wiki containing an exhaustive list of projects, application and companies which are using Node.js. This list includes eBay, General Electric, GoDaddy, Microsoft, PayPal, Uber, Wikipins, Yahoo!, and Yammer to name a few.

The following diagram depicts some important parts of Node.js which we will discuss in detail in the subsequent chapters. 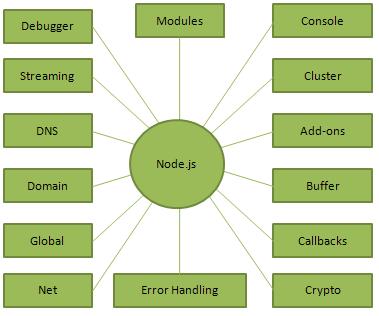 Where to Use Node.js?

Following are the areas where Node.js is proving itself as a perfect technology partner.

Where Not to Use Node.js?

It is not advisable to use Node.js for CPU intensive applications.

You really do not need to set up your own environment to start learning Node.js. Reason is very simple, we already have set up Node.js environment online, so that you can execute all the available examples online at the same time when you are doing your theory work. This gives you confidence in what you are reading and to check the result with different options. Feel free to modify any example and execute it online.

Try following example using Try it option available at the top right corner of the below sample code box:

For most of the examples given in this tutorial, you will find Try it option, so just make use of it and enjoy your learning.

If you are still willing to set up your environment for Node.js, you need the following two softwares available on your computer, (a) Text Editor and (b) The Node.js binary installables.

This will be used to type your program. Examples of few editors include Windows Notepad, OS Edit command, Brief, Epsilon, EMACS, and vim or vi.

Name and version of text editor can vary on different operating systems. For example, Notepad will be used on Windows, and vim or vi can be used on windows as well as Linux or UNIX.

The files you create with your editor are called source files and contain program source code. The source files for Node.js programs are typically named with the extension ".js".

Before starting your programming, make sure you have one text editor in place and you have enough experience to write a computer program, save it in a file, and finally execute it.

The source code written in source file is simply javascript. The Node.js interpreter will be used to interpret and execute your javascript code.

Following section guides you on how to install Node.js binary distribution on various OS.

Download latest version of Node.js installable archive file from Node.js Downloads. At the time of writing this tutorial, following are the versions available on different OS.

Based on your OS architecture, download and extract the archive node-v6.3.1-osname.tar.gz into /tmp, and then finally move extracted files into /usr/local/nodejs directory. For example:

Create a js file named main.js on your machine (Windows or Linux) having the following code.

If everything is fine with your installation, this should produce the following result:

We use the created http instance and call http.createServer() method to create a server instance and then we bind it at port 8081 using the listen method associated with the server instance. Pass it a function with parameters request and response. Write the sample implementation to always return "Hello World".

The above code is enough to create an HTTP server which listens, i.e., waits for a request over 8081 port on the local machine.

Let's put step 1 and 2 together in a file called main.js and start our HTTP server as shown below −

Now execute the main.js to start the server as follows −

Verify the Output. Server has started.

Make a Request to the Node.js Server 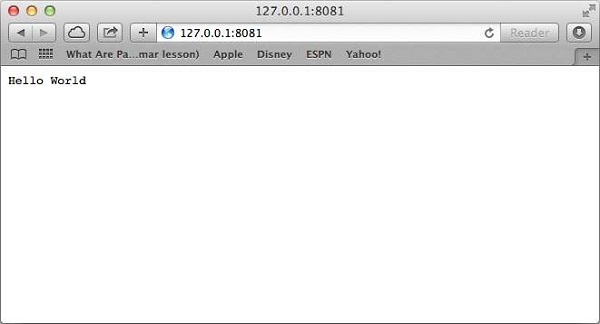 Congratulations, you have your first HTTP server up and running which is responding to all the HTTP requests at port 8081.

REPL stands for Read Eval Print Loop and it represents a computer environment like a Windows console or Unix/Linux shell where a command is entered and the system responds with an output in an interactive mode. Node.js or Node comes bundled with a REPL environment. It performs the following tasks −

The REPL feature of Node is very useful in experimenting with Node.js codes and to debug JavaScript codes.

To simplify your learning, we have set up an easy to use Node.js REPL environment online, where you can practice Node.js syntax − Launch Node.js REPL Terminal

REPL can be started by simply running node on shell/console without any arguments as follows.

You will see the REPL Command prompt > where you can type any Node.js command −

You can use underscore (_) to get the last result −

As mentioned above, you will need to use ctrl-c twice to come out of Node.js REPL.

NPM comes bundled with Node.js installables after v0.6.3 version. To verify the same, open console and type the following command and see the result −

If you are running an old version of NPM then it is quite easy to update it to the latest version. Just use the following command from root −

There is a simple syntax to install any Node.js module −

For example, following is the command to install a famous Node.js web framework module called express −

Alternatively, you can use npm ls command to list down all the locally installed modules.

This will produce a similar result but the module will be installed globally. Here, the first line shows the module version and the location where it is getting installed.

package.json is present in the root directory of any Node application/module and is used to define the properties of a package. Let's open package.json of express package present in node_modules/express/

Use the following command to uninstall a Node.js module.

Once NPM uninstalls the package, you can verify it by looking at the content of /node_modules/ directory or type the following command −

Update package.json and change the version of the dependency to be updated and run the following command.

You will need to provide all the required information about your module. You can take help from the above-mentioned package.json file to understand the meanings of various information demanded. Once package.json is generated, use the following command to register yourself with NPM repository site using a valid email address.

It is time now to publish your module −

If everything is fine with your module, then it will be published in the repository and will be accessible to install using NPM like any other Node.js module.

Callback is an asynchronous equivalent for a function. A callback function is called at the completion of a given task. Node makes heavy use of callbacks. All the APIs of Node are written in such a way that they support callbacks.

For example, a function to read a file may start reading file and return the control to the execution environment immediately so that the next instruction can be executed. Once file I/O is complete, it will call the callback function while passing the callback function, the content of the file as a parameter. So there is no blocking or wait for File I/O. This makes Node.js highly scalable, as it can process a high number of requests without waiting for any function to return results.

Create a text file named input.txt with the following content −

Create a js file named main.js with the following code −

Now run the main.js to see the result −

Create a text file named input.txt with the following content.

Update main.js to have the following code −

Now run the main.js to see the result −

These two examples explain the concept of blocking and non-blocking calls.

Thus, a blocking program executes very much in sequence. From the programming point of view, it is easier to implement the logic but non-blocking programs do not execute in sequence. In case a program needs to use any data to be processed, it should be kept within the same block to make it sequential execution.

Node.js is a single-threaded application, but it can support concurrency via the concept of event and callbacks. Every API of Node.js is asynchronous and being single-threaded, they use async function calls to maintain concurrency. Node uses observer pattern. Node thread keeps an event loop and whenever a task gets completed, it fires the corresponding event which signals the event-listener function to execute.

Node.js uses events heavily and it is also one of the reasons why Node.js is pretty fast compared to other similar technologies. As soon as Node starts its server, it simply initiates its variables, declares functions and then simply waits for the event to occur.

In an event-driven application, there is generally a main loop that listens for events, and then triggers a callback function when one of those events is detected.

Although events look quite similar to callbacks, the difference lies in the fact that callback functions are called when an asynchronous function returns its result, whereas event handling works on the observer pattern. The functions that listen to events act as Observers. Whenever an event gets fired, its listener function starts executing. Node.js has multiple in-built events available through events module and EventEmitter class which are used to bind events and event-listeners as follows −

We can fire an event programmatically as follows −

Create a js file named main.js with the following code −

IT should produce the following result −

Create a js file named main.js having the following code −

Here fs.readFile() is a async function whose purpose is to read a file. If an error occurs during the read operation, then the err object will contain the corresponding error, else data will contain the contents of the file. readFile passes err and data to the callback function after the read operation is complete, which finally prints the content.

Many objects in a Node emit events, for example, a net.Server emits an event each time a peer connects to it, an fs.readStream emits an event when the file is opened. All objects which emit events are the instances of events.EventEmitter.

As we have seen in the previous section, EventEmitter class lies in the events module. It is accessible via the following code −

EventEmitter provides multiple properties like on and emit. on property is used to bind a function with the event and emit is used to fire an event.

Understanding How the Chrome V8 Engine Translates JavaScript into Machine Code Before diving...

Node.js – under the hood

If you follow news in web application development, you probably get in touch with Node.js, one of...

How JavaScript works in browser and node?

A visualization of JavaScript runtime, callback queue and event loop and Web APIs. Nothing major...