Free flow of data should not be confused with data security: IBM's Harriet Green

Harriet Green, chairman & CEO, IBM Asia Pacific, points out that India needs a much wider debate on data localization because it gains a lot from the free flow of data around the world.

Almost 10% of India’s GDP comes from delivering technology services to global companies. This work depends on free flow of data across the world.

Harriet Green, chairman & CEO, IBM Asia Pacific, points out that India needs a much wider debate on data localization because it gains a lot from the free flow of data around the world. 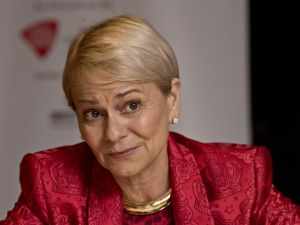 One of the oldest global technology companies, 108-year old IBM has been in India for 25 years and does business worth around $5 billion in India, apart from engaging local talent to support global operations. In an interview with ET, Green discusses tech trends, the BN Srikrishna committee report, and more. Edited excerpts:

IBM is one of the oldest tech companies around. What defines IBM now and how has IBM kept its relevance over the decades?

At the very core of IBM is a proven ability to transform. From the original weighing scales and clocking machines, IBM has led the world in several transformational eras. Later with mainframes, the personal computer space and then transformation into services, and leading in each one of those.

People have written off IBM several times but many other companies have fallen by the wayside. HP is not in the form that it once was. Dell had to leave the public markets and IBM is flourishing.

At the very core is IBM's ability to transform and to be highly relevant to its clients.

What are some of the recent transformations that IBM has done?

We are a totally different business today compared to five years back or even a year ago. IBM spent $37 billion in the last five years to drive new capabilities and new technologies in cloud, blockchain, quantum computing, augmented intelligence and so on.

These new capabilities now account for almost 50% of our revenue. So, in a very short time the R&D and that incredible investment has translated into meeting client needs, expectations and their transformation.

You mentioned Quantum Computing. What are the current developments. Isn't it few years from being mainstream?

Quantum is not ready for prime time but we do have a quantum computer in operation. We have quantum networks across Asia Pacific where Melbourne University and various institutes of science and technology are taking what we have learnt to apply this to society in creation of a new form of computing.

But like IBM started AI, Augmented Intelligence almost five decades ago and is now a leader in those areas. So, In terms of skills, the experiences the capabilities often take longer to develop.

Are you investing in India in some of these areas like Blockchain, AI, ML etc?

Absolutely. We came back into India 25 years ago and we have major investments – whether it is R&D investments and centres for ML and AI. We have systems, hardware and software centres. We have teams working to serve clients around the globe in their developments.

What are the key drivers of business in India--is it support for global operations or local business?

We have whole centres that service the rest of the globe in terms of new skill, new capabilities and new developments. We do a lot of work around smart cities, the command and control centre for such cities; making cities less congested and less polluted.

We organise ourselves by industries. So, if I am running a travel business, airline business, a logistics business, tech business, then you speak and work with people who understand the dynamics of that sector.

Some of the things we are doing here include enabling bots at Bank of Baroda (BoB). BoB launched its new AI bot to do better than man or machine could do on their own by sharing exactly all the assets and capabilities that a bank has and allowing each individual to plan investments in a much more tailored way.

We are helping develop one of the biggest and richest mobile digital environment for existing and new clients of the State Bank of India. The Bombay Stock Exchange has an entirely secure environment enhanced by Blockchain to ensure none of those who participate in the trade can in any way be exposed. IBM manages air traffic control for a few airlines, manages major utilities, helps keep claims going and ensure banks are up and running.

We are creating new products using IBM Watson and cloud for small, medium and large clients.

BN Srikrishna committee report has called for setting up local data centres. What are your views on it?

There are a whole range of big issues. India has become a hub for not only technology services but outsourcing. So, free flow of information is very important for India. So is security of that data.

Securing data is very important but that should not be confused with preventing the free flow of data to ensure trade. And that is very important – almost 10% of GDP of India is from those companies involved in servicing the needs and requirements of other companies around the globe.

So, security is key, free movement of data is key and how do you marry the two in a way that trade continues unimpacted?

You mean the Srikrishna report falls short of addressing some of these concerns?

No, it dosen't fall short but the discussion is much more than just data centers. There is also an entire industry, the $167 billion (IT outsourcing business) worth of trade and revenue that comes into India from working on projects, programs, outsourcing and innovation for other companies.

How do you continue that innovation and capability? Free flow of data should not be confused with data security, which is absolutely critical for every individual and every enterprise.

Does the government asking for local data storage centres in India hamper free flow of data across the world?

There's a data centre element and securing of data inside of enterprises. Almost 80% of the world's data is not searchable and it belongs to enterprises.

How should that data be secured and how can trade, as India knows it and thrives upon, be continued? I think there are many elements to this debate and this is the most important topic of our age.

Data is important to do a better job and enterprises collect data. Privacy is also very important. How do you balance the two?

IBM has been involved with client data for over 50 years, since computing began. Absolutely, user data is their data. We do not take that data, we do not manipulate or sell that data. We do not use the data without their express permission.

In terms of AI, we make it very clear what we are using their data for in terms of algorithms to prove and determine new products and new capabilities, etc.

We provide both data security and data transparency. Many others do not. The issue is how do you use that data–to do work that’s better done by humans and machines together. The bots at BoB are a great example--better than a human answering the phone.

Will bots and automation take away jobs?

IBM has always been a technology optimist and the facts have borne it out. None of the previous eras have destroyed jobs--jobs do change and new jobs are created and we believe in this period of Augmented Intelligence, every single one of our roles will change.

New jobs will be created as you put data to work – how Blockchain stops the production of fraudulent medicine or helps to clean up the seafloor – it is new work being created by technology. We think the history of technology will repeat itself in extractable change but not with expulsion of humans.

What's your next five-year goal for India?

IBM is wedded, committed to India. There are critical parts to the India vision. The first is we continue to have India as a hub that enables its skills to serve the globe and to serve companies in India.

Secondly, we are pledged to support the government of India in its digitisation plan whether that's around health, around analytics, making the lives of citizens better in small, medium and large cities and so on.

And thirdly, that the goal around improving quality of farming, smarter cities, infrastructure enablement. We will continue to be a major player in those.